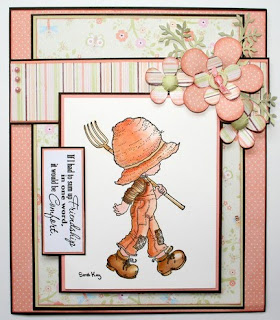 Hi Girls
Just to wet your appetite a bit more for the Inkadinks we are featuring another of Dawn's ( www.allpinkgirl.blogspot.com)
fab creations using this little Sarah Kay stamp. As well as colouring the image with the Inkadinks she has also just lightly distressed around the edges of the petals of the punched flowers. It is just so pretty. I love the matting and layering up of all the background papers. The balance of colour is so soft and subtle, lots of people often ask how we would colour in this particular stamp, so I hope this gives you a bit of inspiration.
Happy Crafting!
Posted by Imagination Crafts at 17:25 1 comment: 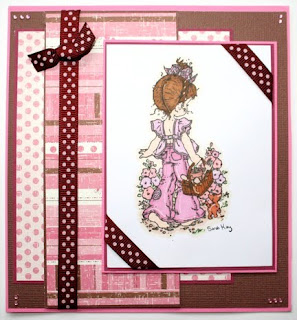 Inkadinks rule!!lol!! So many of you have been asking about how to use the Inkdadinks and I know you have been looking at Dawn's www.allpinkgirl.blogspot.com. step by step tutorial on her blog. I thought you would also like to see some of the cards on our blog. Dawn has sent me some of her artwork so we can display it at Shows and on the Blog. She makes it look so easy doesn't she! Well it is. As you know Heather demos with the Inkdadinks at the Shows, so if you want to see them used in Glasgow and Birmingham come and see us on the Stand. Personally I was a great fan of the Sunset Set but I have been using the Vintage set alot recently especially for distressing. I love the muted colours and they are just so easy to use with Cut n Dry Foam.
We are also expecting some new Templates in today, so look out for them on the Web Site. I have been using them with the Silkies and the effects are incredible - so watch this space in the next few days.
We are frantically preparing for the Trade Show, Stitches at the Nec and there just aren't enough hours in the day to make all the samples.
Jayne over at Stampasorus has also fallen in love with the Inkadinks and the Silkies, so look out for her take on them, used with her range of cute stamps.
If anyone can suggest any ranges of really soft, muted ranges of background papers, I would be really grateful to know. You would think we saw everything but as time is at a premium at the moment any suggestions would be more than gratefully received.
Our weather has warmed up just slightly here in Dorset and Barney, who has been reclining on a sofa with an injured paw (what's new for a Springer Spaniel)! may have to attend Doggie Weight Watchers as he has put on a pound or two because he hasn't been harrassing the local small mammal population as he normally does. He still looks gorgeous though but as he is 7 years old in March we don't want his middle aged spread getting too much of a hold too soon!
Happy Crafting!

Posted by Imagination Crafts at 10:43 2 comments: